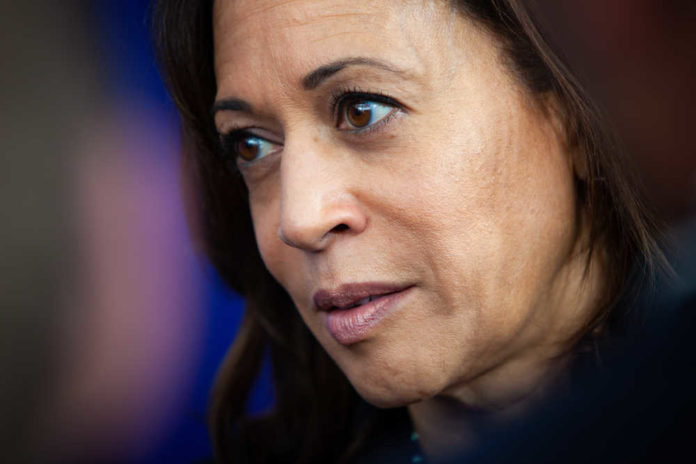 (JustPatriots.com)- Just weeks before her first day on the most important job she may ever have, newly elected Vice President Kamala Harris spotted herself on the brand new cover of Vogue Magazine, and what she saw anguished her.

Well, this woman on the cover wasn’t Kamala Harris. Kamala wears expensive pantsuits, sharply ironed blouses, simple pearl necklaces, and a perfunctory American flag pin on her lapel. And this woman on the magazine cover was not at all like that. This Kamala wore Chuck Taylor kicks, stretch pants, a plain white Tee, and a shiny jacket.

Across her knees, the copy read, “Madam Vice President!”

But across her face was a phony, uncomfortable smile.

Team Kamala was not having any of this. How could she, the first female Vice President!, be treated this way? Tina Flournoy, Harris’s new chief of staff, went to president-elect Joe Biden and was hurt, once again, when her concerns were not taken seriously. This happened, according to a new book, This Will Not Pass: Trump, Biden, and the Battle for America’s Future, by New York Times writers Jonathan Martin and Alexander Burns.

After hearing the Harris complaints, Vogue editor Anna Wintour told Harris’s then press secretary Symone Sanders that she thought the cover made Kamala Harris look more ‘relatable,’ and there was no slight.

But amid Harris’s protestations, a Biden adviser recommended Team Kamala drop the matter. Harris’s position as vice president commands respect, but this is a superficial “first world problem,” Harris’s chief of staff was told.

Indeed, there were far more severe issues about which to worry.
What would be the point in fighting with Vogue Magazine, a conspicuous supporter of the incoming Biden administration? Especially one that has such a far reach in readership.

This “dramatic” incident is only one of several examples of Harris feeling slighted, with complaints from aides and staffers that harris is a “diva.”

If Kamala Harris continually finds petty displeasure and offense where ever she goes,
and in the people who work for her, she will never become as ‘relatable’ as the woman she saw on the cover of Vogue.