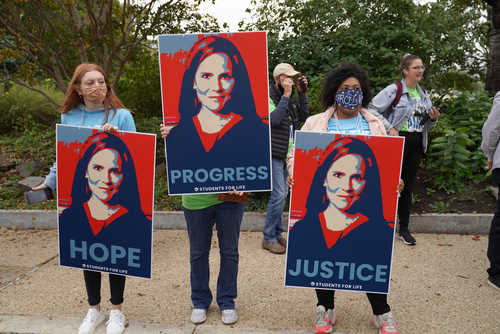 (JustPatriots.com)- Any decision that is made in a case related to gay rights could have far-reaching consequences on similar cases in the future.

Those were the words of Supreme Court Justice Amy Coney Barrett, who earlier this week heard oral arguments in a case that was brought by a web designed from Colorado.

Lorie Smith, a 38-year-old business owner in Colorado, filed this lawsuit against Colorado, saying that she has rights under the First Amendment that allow her to deny her web design services to same-sex couples because that goes against her religious beliefs.

The case in questions, 303 Creative LLC v. Elenis, had oral arguments on Monday in front of the Supreme Court.

While the oral arguments were ongoing, Barrett started to speak about similar cases that could hypothetically could be brought in the future. One she cited was a media outlet that would only promote announcements from same-sex couples rather than promoting announcements from both opposite-sex and same-sex marriages.

“However we decide this case obviously applies to others. What if we say it’s a gay rights group that wants to publish gay rights announcements, online, all year round, not just for Gay Pride month, because it wants to celebrate love in that community.”

Some gay rights activists are afraid that the Supreme Court could look to strike down the case of Obergefell v. Hodges, which made same-sex marriage legal throughout the United States. Their concerns started after the high court overturned the Roe v. Wade decision over the summer, removing federal protections for women to get an abortion.

Following that ruling, conservative Justice Clarence Thomas wrote a concurring opinion that said the court “should reconsider all of this Court’s substantive due process precedents, including Griswold, Lawrence and Obergefell.

“We have a duty to ‘correct the error’ established in those precedents. After overruling these demonstrably erroneous decisions, the question would remain whether other constitutional provisions guarantee the myriad rights that our substantive due process cases have generated.”

That led many LGBTQ organization to express their concern that the Supreme Court, which has a conservative supermajority, would look to overturn many other cases that have been ruled on.

Back in June, the president and CEO of the Gay & Lesbian Alliance Against Defamation, Sarah Kate Ellis, said:

“Thomas’ dissent is a blaring red alert for the LGBTQ community and for all Americans. We will never go back to the dark days of being shut out of hospital rooms, left off of death certificates, refused spousal benefits, or any of the other humiliations that took place in the years before Obergefell.”

The current case before the Supreme Court was brought by Smith, who refused to offer her web design services to a same-sex couple. She told Newsweek this month:

“Because of my faith … I am selective about the messages that I create or promote. While I will serve anyone, I am always careful to avoid communicating ideas or messages, or promoting events, products, services or organizations, that are inconsistent with my religious beliefs.”